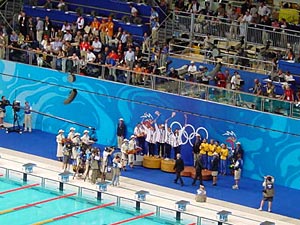 To say this first day of swimming was an exciting experience is an understatement! The electricity in the aquatic center was intense. Earlier in the day, we watched the prelims of several events, including the Women's 100 Fly, Men's and Women's 4X100 Freestyle Relay, Men's 400 Freestyle and Women's 400 Individual Medley. The energy and enthusiasm from the fans in the morning set the stage for the evening semifinals and finals. Those Ozzies can really cheer!

The athletic talent here in Sydney is impressive! Of the four final events of Day 1, five world records were broken (the first Australian swimmer out in the Men's Freestyle Relay broke the individual record as well as helped his team win the overall record).

The US Women were a major highlight of the evening, with Jenny, Dara, Amy and Courtney smashing the World Record in the Freestyle Relay set by the Chinese in 1994. Here's a photo of their inspirational awards ceremony at poolside.

Both Jenny and Dara are positioned for the 100 Fly finals tomorrow night. There's a lot of excitement for this event with pressure from the Netherlands and Australia. It's the first individual final for Jenny in Sydney. She's already a winner!

Cheers from Sydney,
Karen and Tom