The Peaks and Valleys of Competition 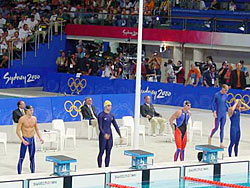 There have been major upsets as well: The US Men's loss to the Aussies in the 4X100 Freestyle relay for the first time in decades. The "untouchable" Ian Thorpe missing Gold in the 200 Free. The unexpected and heartbreaking finish of the Women's 100 Fly. 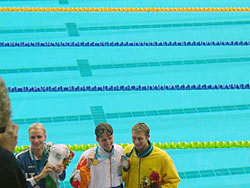 Watching the finals here, you begin to realize that any of these elite athletes could take the Gold. They've traded the top times among themselves over and over again. Like musical chairs, you never quite know whose turn it is this time around.

Jenny is recharged after the 100 Fly and preparing for the 100 Free on the 20th. Misty is geared up for the prelims of the 200 Fly tomorrow. We're all fired up to see them put out their best!

Here are a couple photos from the exciting finals of Men's 200 Free.

I love feeling the changes in my body in such a short time!