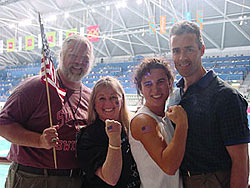 Yesterday's final day of swimming ended this adventure on a very high note — World Records set by both the U.S. men's and women's teams in the 4x100 Medley Relay. They brought the final U.S. swimming medal tally to 33!

Winning the Gold and crushing the World Record in the relay was a climactic finish to Jenny's and Dara's swimming careers*. In her split, Jenny's time in the Butterfly was the fastest ever swum. Dara's Freestyle split was 1/100 second off the fastest time ever swum.

The close of swimming has kicked off a string of Olympics-related parties. And we've let our hair down for the first time! The Sports Illustrated shindig in the Botanical Gardens overlooking Sydney Harbor was quite a scene. Since many Olympians still have to compete, it was mostly a swimming party — but greats like Carl Lewis made an appearance. The highlight of the evening? U.S. Backstroker BJ Bedford hopping on stage to sing "I Will Survive" with the band.

We're taking the next several days to celebrate, rest and get to know Sydney some more. These last few weeks have been exciting but draining. We're now coming out of our swimming cocoon.

Here are some photos from our last days in Sydney and poolside with lymphatic massage specialists Dale Perry and Hannah Hanlon.

Over and Out from Oz,
Karen and Tom

*Both Jenny Thomson and Dara Torres had planned to retire from swimming at the writing of this. However both returned to the pool to win medals in future Olympics, as we all witnessed in Athens and Beijing!

Return to the Olympics Page