Since 1998, Center of Balance director Tom McCook has been working with World-Class swimmers to support their health and fitness, enhance their functional movement and help improve their performance in the water. From 1998 to 2003, Tom was a conditioning coach for the Stanford Women's Swim Team under Coach Richard Quick. For over 2 years leading up to and during the 2000 Sydney Olympics, Tom trained Olympic gold medal swimmers Misty Hyman and Jenny Thompson, who shares the honor with Natalie Coughlin and Dara Torres of being the most decorated female US Olympian in history. For over 8 years, Tom worked intensively with Olympian Natalie Coughlin, who earned 5 medals in the 2004 Athens Olympics, 6 in Beijing 2008, and 1 in London 2012. 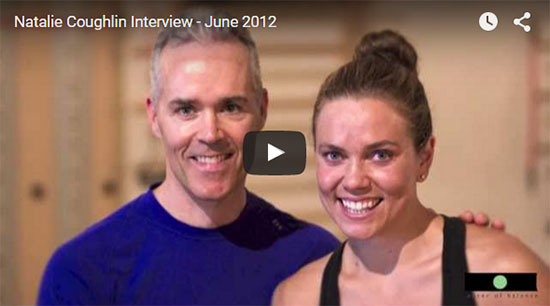 Congratulations to swimmer Natalie Coughlin, who won her 12th Olympic medal in London! Natalie now ties swimmers Jenny Thompson and Dara Torres as the most decorated female US Olympian in history. For the past 8 years, Natalie has been working with Tom at Center of Balance on functional movement and exercises to support her training in the pool.

Also, a big congrats to Kristian Ipsen, who won a bronze medal in synchronized diving with Troy Dumais, and to Cassidy Krug, who finished 7th in the 3-meter springboard event! 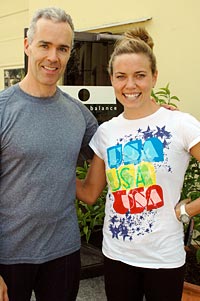 Congratulations to swimmer Natalie Coughlin for her success in Beijing! Natalie became the first American female swimmer to win six medals in a single Olympics. She won three bronze (in the 200m individual medley, the 100m freestyle, and the 4 x 200m freestyle relay), two silver (in the 4 x 100 medley and freestyle relays), and a gold in the 100m backstroke, becoming the first woman to win repeat Golds in that event, following her win in Athens. Natalie works with Tom McCook at Center of Balance on functional movement and exercises to support her training in the pool.

Check Out the 2004 Olympics Results

Hats off to 4-time Olympian Jenny Thompson who earned 2 Olympic medals in Athens to become the most decorated US Olympian in history! SILVER in the 4 x 100 Freestyle Relay and SILVER in the 4 x 100 Medley Relay. From 1998 to 2000, Tom worked with Jenny and Gold medal swimmer Misty Hyman in preparation for the Sydney Games. Jenny took home 3 Golds and a Bronze, while Misty's historical swim in the 200 Butterfly earned her Gold. During the Games, we kept a photo journal of events.