Enjoying working out — and wanting to clobber every one of his eight brothers — stand out among childhood memories for Moss Beach resident Tom McCook.

He never did lay a hand on his brothers. But he did learn about how the human body works.

So much so that today McCook, 41, is certified in an astonishing number of fitness, movement, body therapy and coaching disciplines. He's gained national recognition as a fitness and movement specialist and teacher, and with wife Karen deMoor, just released a video blending Pilates and yoga.

"Tom has done a lot," grins deMoor, who brings fitness, business, financial and media skills to the family fitness studio, Center of Balance.

Center of Balance runs on balance: McCook does the teaching, deMoor handles finances and media relations.

"There is no reason a person has to get decrepit," insists the lithe, vibrant McCook. "You can live to a vibrant old age if you know how to take care of yourself. You have to be aware of what you need and how you feel."

The video, "Combining Pilates and Yoga for Balance," centers on two things that define McCook's life and teaching styles: fitness and balance.

The couple hope to make the video available through amazon.com and internationally through Australian sportswoman (and McCook client) Shane Gould. It sets a smooth tone at once with a beginning sequence of McCook going seamlessly through a series of Pilates movements to a soothing acoustic musical background.

Then it explains Pilates basics and goes into 45-minute "Flow" with Pilates and yoga so that it's hard to tell which is which.

"Pilates and yoga support the way our bodies are designed to move," McCook said in a statement. "In addition to helping create core strength, flexibility and better fitness, the breath-linking movements of this practice will deepen the connection between your body and mind. You'll gain more awareness, which can positively affect every area of your life."

Developed by Joseph Pilates to help rehabilitate soldiers injured in World War I, the Pilates method conditions the entire body, working from the inside out to develop core strength and flexibility, long and lean musculature, awareness and balance. Add the flexibility, focus and breathing techniques of yoga, and you have "an awareness of how to move every part of the body," McCook said. "You're more efficient and less likely to injure yourself. You want body alignment from head to toe."

And that's not just in the gym."This translates into life. How you drive, how you sit at your desk at work - there's a big carryover.

"It's an approach McCook developed over 18 years of study, education and teaching with the Mountain View-based Center of Balance, where he offers individual and group instruction in Pilates, body therapy and life coaching. 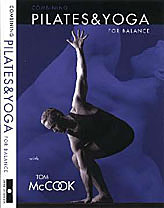 Growing up on the East Coast, McCook "really enjoyed the feeling of working out, learning about the body." But he didn't like exercise. "I watched how people trained - it was awful."

He came to the West Coast in 1982, immersed himself in sports at Foothill College, and eventually taught at Gold's Gym.

In 1988 he discovered shiatsu, and soon became certified. "That was a big change in how to work with the body. More holistically.

"That set him on a path of integrating bodywork into fitness, a direction he pursued through studying at the Lomi School and Feldenkrais. In 1995, he began studying Ashtanga yoga.

"The goal is to pay attention to what you're doing, as opposed to seeing how much you can do," he said. "It's economical, effective, fluid, more important than making muscles.

"You want to make the body smart. It's more working in than working out."

DeMoor's background, though more mental than physical, is no less dedicated than his.

A college political science major deeply interested in international development issues, she had been the national press director for Oxfam, which supports developing communities, and worked with Pesticide Action.

Now 35, deMoor practices Pilates and yoga every day and feels that "my body is healthier than ever."

So is her husband's resume. He and Center of Balance were profiled in Women's Sports Illustrated, USA Today, Self and other national magazines. He's been on the "Today Show" and "Evening Magazine."

"For the past two years he has trained Olympic Gold medal swimmers Jenny Thompson and Misty Hyman.

"This is our life," said deMoor. "It all flows. Nine to five doesn't exist. We love our life."

McCook's next goal? To bring bodywork to schoolchildren, to "improve their self-esteem and enhance the learning process."