Could any other place be more results-oriented and time-driven than Silicon Valley? Produce, execute and accomplish as many tasks in the shortest amount of time possible, thank you very much.

We approach fitness the same way. And Pilates, the body-conditioning exercise routine with the hard-to-pronounce name, (pul-LAH-teez), is a multi-goal workout. To understand it, you must concentrate on you body. Inhale into your chest, ribcage and back without lifting your shoulders.

Exhale, and draw the navel toward your spine without bending through the middle of your body. Drop your shoulders away from your ears and drop your chin slightly forward. Do all that and you're already a step closer to understanding what Pilates-based exercise is all about.

The Pilates method has been around for about 80 years and its practitioners laud it for its efficiency, effectiveness and mind-body connection. Athletes and celebrities are doing it, and Pilates is gaining notoriety with the mainstream fitness community and consumer, albeit at a glacial pace.

Pilates-based conditioning simultaneously strengthens and stretches muscles using the body's own resistance in a series of fluid movements. First performed on the mat, the sequence of moves can be transferred to specifically designed equipment.

The key to Pilates is that movement and stability come from the powerhouse or core muscles of the body - the lower back, abdomen, hips and buttocks. Thus, the entire body is engaged fully in each exercise.

The combination of simultaneously stretching and strengthening along with performing few repetitions helps to develop long, lean muscles, muscular balance and improved posture.

"Most of the time we are unaware and fragmented in our approach to exercise and training,"says Tom McCook, who teaches Pilates-based exercise, yoga and resistance stretching at his Mountain View studio, Center of Balance. "People look at arm and leg movement and spend too much time exercising them as separate parts of the body." 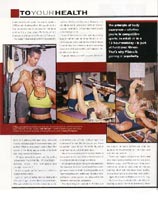 This is something the lean, 190-pound, 6-foot-1-inch McCook says he did when he was formerly a 220-pound bodybuilder. He would add a few crunches and stretches for the body and call it a day, says McCook, who's founder and director of Center of Balance.

He hasn't lifted weights for nine years and says he's actually stronger now, thanks to Pilates. McCook says it's because when you perform Pilates, movement comes form the center of the body and you attune to what your body needs for balance.

"Pilates exercises give you the ability to become more mindful of your body," McCook says. "It's self-awareness through movement."

And it's usually performed in a quiet composed environment.

So it's more relaxing than pumping iron at a typical gym, where there are headsets, TVs and whatever else to serve as a distraction. McCook's Center of Balance, on the other hand, provides calm surroundings as meditative or New Age music plays in the background.

Some Pilates exercises look much like yoga or other traditional workouts. In order to adapt to the subtleties of technique in breathing and posture, and to learn the sequence of movements, participants begin with mat work.

A good instructor will provide direction and verbal cues to help in adapting to the nuances of a mat. For instance, you have to anchor your torso for stability while lengthening your spine and neck.

The mat series of movements then shifts to equipment and is best done worth an instructor in a one-on-one or small-group format.

Of the several pieces of equipment possible, the Universal Reformer, which resembles a single wood-frame bed with a sliding platform, is the most widely used and known. An adjustable, spring and pulley system are attached to the Reformer and provide resistance.

The teachings of Joseph H Pilates are the basis of each technique and sequence of movements on the floor and with the equipment.

Swimmers typically have lower back and shoulder injuries due to muscle imbalance, McCook says, and Pilates can help overcome that. Athletes also want an intense training that will increase their performance level without straining their joints.

McCook has worked with athletes including women from the Stanford University Swim Team. Many have worked with him to train for the 2000 Summer Olympics in Sydney, Australia.

McCook says that prior to and in between an athletes event, muscles should be in a state of relaxation. "If muscles and joints are tensed, tight and hard at rest, blood flow is inhibited, and the energy for the arms and legs won't be available when it's time to perform, McCook says.

The principle of body awareness, whether you're in competitive sports, in rehab or in a 12-hour workday, is part of functional fitness. And that's one of the reasons Pilates conditioning is gaining popularity.

Aesthetics are still important, but functional fitness is about maintaining energy throughout daily tasks, reducing stress and being injury free.

"People want more depth from their exercise program. They want it to contribute to their quality of life," McCook says. "Your entire mind-body awareness carries over to self-care and your ability to enjoy life. Pilates is a natural movement toward the right actions for your life."

It's so helpful to have someone adjust you properly when learning an exercise.