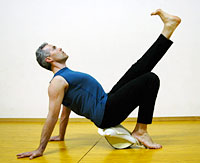 Center of Balance is one of the first studios in the United States to integrate the BodyCode System into our work. The BodyCode System was founded by Pino Carbone of Florence, Italy. Pino developed his own synthesis of yoga, Tai Chi and the innovative ArtForm® System, a patented series of exercise equipment including the MasterStretch boots, Elvis / BodyKey, the Pro-Arch, Sculptor and the elaborate Geometrix and Pegasus.

Each BodyCode apparatus comes with a training method developed by Pino to enable you to improve your physical condition by strengthening and stretching in a spherical motion. The rhythmic exercises and integrated breathing techniques work your body from the inside out, giving you a total tune-up!

This valuable and transforming work is offered in private and small group intensives and workshops.

More about our Private Sessions

Some of the benefits of the BodyCode System include:

It's so helpful to have someone adjust you properly when learning an exercise.